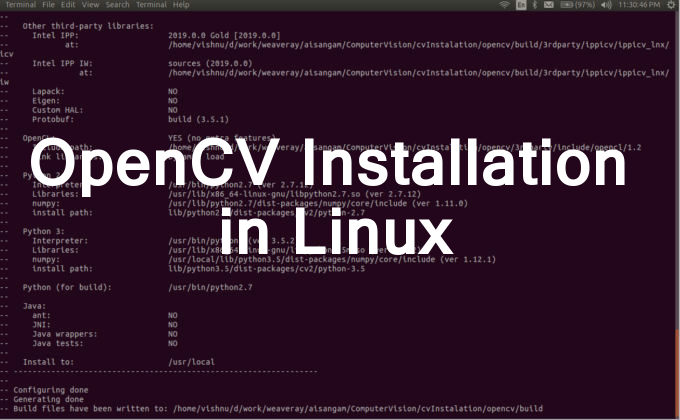 We all know very well that OpenCV is a very important library when we work on image/video processing/ Computer-Vision. Even in its recent updates there are many enhancement have implemented and made support of ML and DNN module efficiently for computer-vision. But beginner face many difficulties on OpenCV installation and it became a hectic process. So in this post i am trying to reduce your burden with easy and generalized installation methods on Linux having Ubuntu OS.

There are mainly three ways of OpenCV installation in Linux environment. we are going to describe each of the ways so that you can boost up your speed of development. Without wasting of time we directly come to the main point.

Main 3 ways of OpenCV installation are as:

All method have its own pros and cons but mainly it depend upon your terms of use, Although i want to suggest you that installation form source is the best method which is applicable in all development processes. We will discuss each one by one.

This method is very easy to make OpenCV installation working, generally it is useful when you have to install Caffe library. In this method only you need to run below given command in your Linux terminal for Ubuntu OS.

If there is any error then resolve them and re-run this command. If you got any error then you can post here to get help. Or you can search error on open-source platform like Google or stack-overflow

After this you can check its version from python terminal

You can use pip(package installer for Python) for  OpenCV installation. This is really fast ways to use OpenCV in your python code. For this you need to run these command:

But using this way you will get much difficulties to execute code in which c++ code integration takes place. So among all ways, using make installation of really is the best ways. In next point we are going to cover this steps.

In this way we will only focus on most generalized method without any complexity. This set of command works mostly on all Linux PC having Ubuntu OS.
Prerequisite versions of application should be install in your pc:

Now open your system terminal and just use these command line to install OpenCV:

Using this step you will make your system ready for OpenCV installation. All the required OpenCV-dependant package will be install via these command

else, via terminal you can download this source file from below given comand line.

Now we need to make directory to generate build, make and all its binaries files. For this use below commands

If you want to use opencv-contrib also then use this command:

Now we have to make build source file from build-directory.

If you have 4-core processor then run below command. According to the number of processor exist in your CPU you can change this number.

After this run below command to make final installation in root system:

That’s it. Now you can check version of OpenCV from python terminal

If you want to run OpenCV via virtual-environment then you have to perform this step:

You can check version of OpenCV within virtual-environment python console.

Hope this will work and you have enjoyed this post. If there is any difficulties then let us know via comment or error posting here. You can get more computer-vision posts from here.

Image Processing in Computer vision: How to Read and Write Images in Python