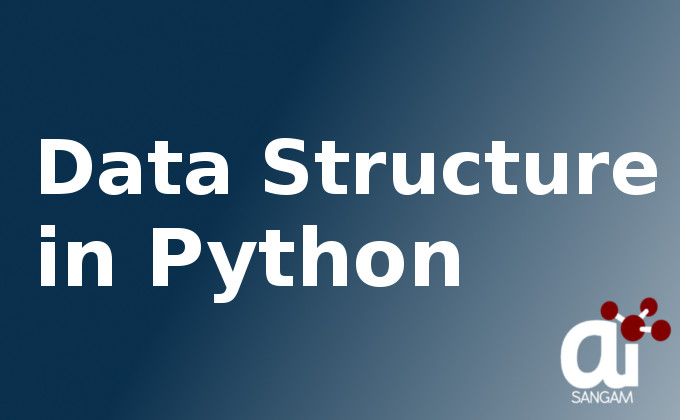 Firstly we need to understand the data structure and then we will know how it is implemented in python. We will start from very basics and will cover the complete data structure of Python.

Data structure is a vast field of computer science in which arrangement of data is defined. It perform many task to provide efficient way for manipulation, operation, modification and access of data.

The main part cover by the data structure is:
1. Data Management: Management way of the data in storage device. It is responsible for easy data storage and retrieval, Provide security of multiple users etc.

2. Data Organisation: Classification and arrangement data to make it easy to use.
3. Data storage: Storage of data in volatile, non-volatile and semi-volatile disk in a efficient manner.

Python also provide some type of data structure to make its interpretation easy.
Note: Python is officially interpreted language but many other system of python IDE provide compilation feature.

Here “a” is a variable and contain the assigned integer value 5. It means we are defining a variable of integer type which will occupy the memory in storage disk with a particular physical and logical address. Further, on calling of variable, it will refer to assigned address and fetch the stored value. Name of variable is abstraction of address of particular memory address. Apart form this side we will focus on main part of this tutorial i.e, data-type.

In python you can directly assign variable with any data-type. Their is not any requirement of initialization. In general term this feature is known as dynamic typing.
Let me clear one thing also that, in python there is not any types of variable. The label of value which is associated that variable become the data-type of that variable.

For example:
text=”Aisangam”
Here we have been directly initiated a variable ”text”. Python interpreter will automatically understand that “text” is a sting type variable.

Now we will understand each data structure with example as shown in tree structure image.

The most basic type of data is known as primitive data-type. Such type of data-type cant be separated further. For example numbers and string.

Lets understand this with the help of example.

In this code snippet barrier is a variable containing boolean value. Further using “if” statement it is checked that condition is true or false. Because here condition is True so it will print “Welcome to Aisangam”.

You can also perform mathematical operation on boolean data-type. It acts like other number data-type.

here True work as 1 and false work as 0.

String is also a most common primitive data-type used in mostly all programming languages. In python any number, character, symbol enclosed by single (‘’)or double (“”) quote is interpreted as string data-type. String is a immutable (fixed) data-type. Immutable data-type means the variable is allocated memory only once at the time of its declaration. Further it can be only re-use in through-out the program.
For Example:

Further, if you have to print text in multiple line then you can enclose text with three double quote.

String works like list in the way of slicing. Slicing means you can get only certain part of string from their index value.

Explanation:
text[8:] this type of text separation is known as slicing. it is defined like
[start_Index:end_Index] type of indexing. By default it start with 0 index and end with last index.

In depth when you will work with different language-type or format then there will be great problem of encoding. In python there is some key confliction which have to know. It will help you to solve many challenges in future.

From this code part we got that python2.7 support both encoding(Non-unicode(ASCII) and unicode) by default.But python3 support unicode(UTF-8) by default.

Number is most usable data-type in all languages. The supported data-type inside numbers is
1. int
2. float
3. complex

Int: It contain all type of integer value and the maximum size of this data-type is unlimited. You can assign value as max as possible according to the memory size.

Float:
It contain decimal values. After decimal it can contain 15 values.

Complex:
As mathematics you can define complex value which is also known as imaginary value.

Bytes is a machine understandable language. Human cant read it. So when machine need to communicate with machine then often we use this type of data-type. Networking, socket programming is the best field of programming where this data-type is used frequently. This data-type make system fast because there is not need of changing in encoding unlike another data-type. Such type of variable can store a sequence of bytes ranging from 0 to 255. It is a immutable data-type.

List is a array like data-type in which we can store data in a sequential order. Unlike array it can store heterogeneous data-type element.

Some benefits of tuple:
Light-weighted
Work as constant
Can be useful to make key for dictionary
Single container etc.

Dictionary is a very efficient data structure to store a large data. Dictionary is Un-ordered collection of data in which data is stored in key-pair wise. This is highly optimised for retrieval of particular data from a large data collection.

With the help of key data can be directly access.

In this non-primitive any type of data can be stored as value of any key. At dynamic time you can also change the value as it support mutable behavior.

There are some important functions used in dictionary.
Keys():

In set all the element remain unique. So for removal duplicate entry in list you can take the help of set.

Frozen set:
Frozen set is a traditional type of set. After creating a frozen set it cant be modified. This is immutable data structure.

In complete tutorial we studied about complete data structure in python.